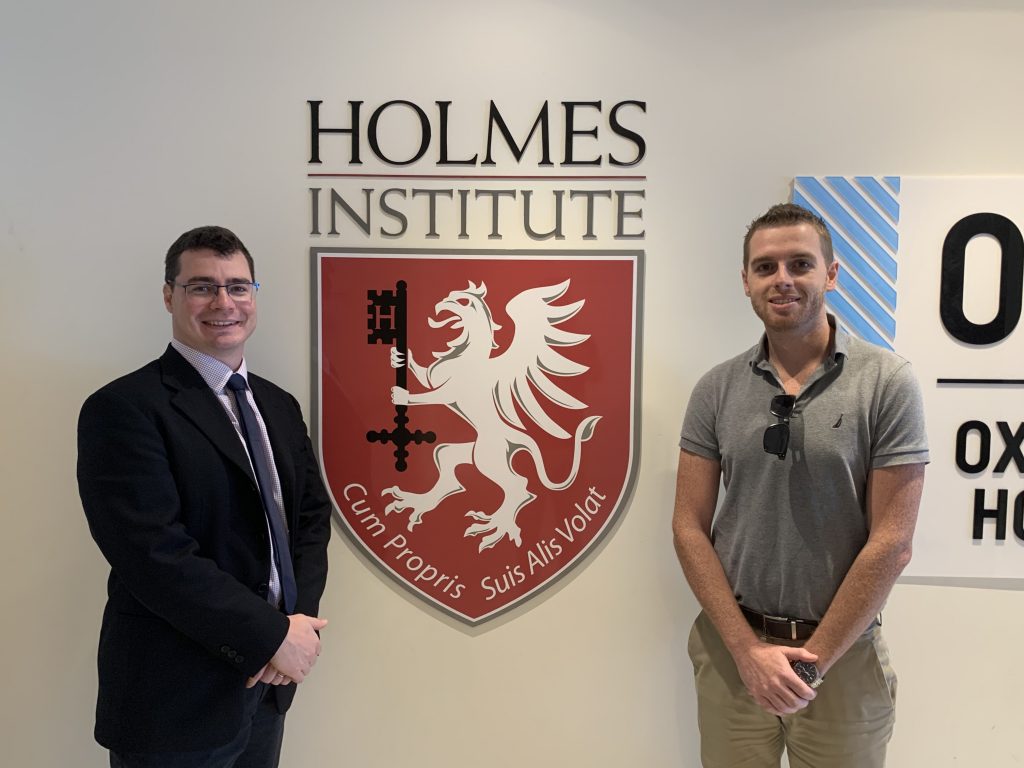 Currently, studying for two years in Australia is an important condition for being able to consider applying for temporary residency which can then possibly lead to further opportunities for both career and extending your stay in Australia. Therefore many students look for a two years program while browsing through their options.

Holmes Institute offers this program with an insightful aim which is described in the following words by one of the students: “Most students just myopically choose a random program without seriously considering the competition they might have to face, upon completion of the course, in the real world.  The MBA & MPA program at Holmes offers a very cost effective way of obtaining two Masters degrees in a two-year period but also enhance their earning capability as a temporary  resident of Australia as well as enhancing their earning capabilities when returning home, There is no doubt that with such a widely accepted dual master’s degree, graduates can earn much higher (in some cases, the difference can be more than $20,000 per annum) than what they could earn with a more general qualification which does not promise a high degree of expertise.

In the professional world, this dual qualification is regarded highly because an employee formally trained in both business administrations, as well as professional accounting, can prove to be an invaluable asset to any organisation. Holmes Institute’s combined course is designed in such a way that it allows the students to earn two master’s degrees in just two years. This is because a number of modules, such as Strategic Information Systems for Business and Enterprise, in the curriculum are common. In this way, students receive the benefits of two master’s degrees at the cost of just one.

There are some obvious benefits for completing this course at Holmes Institute on the Gold Coast, although the school has branches in many other cities including Sydney, Melbourne, and Brisbane also. Following an official announcement made by the Australian High Commission, it is widely known now that the Gold Coast is currently a designated regional area. Apart from considering the fact that the average cost of living in this beautiful, sunshine city is considerably lower, it must be noted that studying for two years here may mean an additional advantage of 5 immigration points which can make a big difference in most cases. Also, it is easier for students to find adequately paid part-time work due to less competition and wide availability of casual and part-time job opportunities in an internationally popular tourist destination like the Gold Coast. Sincere students, who carry out good research before making such an important decision of their lives, must not fail to take these significant advantages in account.

Studying in a designated regional area may also mean comparatively longer graduate visa duration after the successful completion of a two-year course like the MPA + MBA program discussed here. By choosing to live and study in a designated regional area such as Gold Coast, applicants may be able to apply for an extension on their graduate visa in the future. A three-year graduate visa could give them enough time to settle professionally in Australia. However, it is advisable to consult an immigration agent and a lawyer before applying for such visa as they can help you plan and simplify the entire process which could seem daunting or confusing otherwise.

Students who hold a bachelor’s degree from their home countries sometimes hold back from enrolling in this wonderful course mainly because they are misinformed. One of the popular misconceptions is that a master’s degree is difficult to study and it does not allow students enough time to work part-time. This idea can mean nothing more than a baseless rumour as most students at Holmes not only easily complete their studies within the course duration but also do part-time jobs to support themselves while studying. Besides, the academic workload in this program is, in fact, lighter than many other research-based master’s programs at Australian universities.

Exceptionally well-written study material, guidance from highly qualified and experienced teachers, and insightful assessment system make passing the course a fairly achievable academic goal for all students; this is probably why the success ratio in Holmes Institute’s MBA + MPA course is very high. Students from various academic backgrounds ranging from engineering to humanities have successfully passed this course in the past and have earned their desired immigration points. As this is a highly sought after qualification by organisations, it is quite likely that students find genuine sponsorship after working with an organisation for a certain period and exhibiting a good level of professional commitment.

Yet another misconception is regarding the tuition fee; the general belief is that a master’s level qualification costs higher than a vocational qualification. Although this can be true in some cases, while talking about Holmes Institute’s MBA + MPA program, it should not be forgotten that it is the most cost effective program of its kind in Australia. In some countries, similar courses are advertised with a lower tuition fee which comes with many hidden charges. While studying at a reputed school like Holmes, students at least do not have to worry about such trappings. Naturally, the tuition fees of a master’s level qualification will always remain higher as compared to a trade or vocational qualification. However, most international students have now begun to realise that this expense is a worthwhile investment in their future..

The total cost of MBA/MPA at Holmes Gold Coast for two years is currently $33,600 or $8,400 per semester and payment schedules are available. The campus Manager, Bailey Eder is always available for college tours and more detailed information about the course.